The Seedboat (Bàta an t-Sìl) Colum Sands & Maggie MacInnes
A unique bilingual project exploring musical and linguistic links between Ireland and Scotland in song and story. 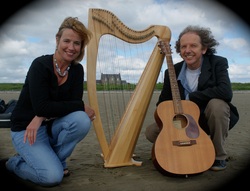 Songs old and new from the heart of Ireland and Scotland

It all started about two hundred years ago with a Hebridean shopping trip to Newry in County Down. A young man called Donald sailed off on the little vessel known as The Seedboat (Bàta an t-Sìl), to buy whiskey for his forthcoming wedding on the island of Barra. Upon arrival in Newry however, he found more than he had bargained for! The bitter sweet story of what happened next survives in a beautiful song composed by Catriona, the bride-to-be, whom he had left behind, a song so powerful that it has bridged the years and inspired two musicians from either end of that fateful voyage to create this remarkable new album, The Seedboat.

Maggie MacInnes, from generations of singers and storytellers on Barra and Colum Sands, from the great County Down musical clan, have pooled their considerable talents to weave a bi-lingual tapestry of songs, old and new, reaching across the waves that have divided and joined Scotland and Ireland over the centuries.

A critically acclaimed singer and clàrsach (harp) player, Maggie was led to the great well of Gaelic traditional song by her mother, Barra’s legendary Flora MacNeil, she has recorded five solo CDs, composed music for television and, in 2004, was voted Gaelic Singer of the Year in the BBC Scots Trad Music Awards.
Colum Sands is a much travelled singer songwriter, his songs have been recorded and translated by many highly respected artists around the world and he is a recipient of the Living Tradition Award for Services to Folk and Traditional Music.

Maggie and Colum have worked on The Seedboat over the past five years, exchanging ideas and recording tracks amidst their own busy solo schedules. The album rejoices in the wealth of language shared by two countries and carries stories and emotions that are truly universal. From heart-breaking love songs to quirky originals, from translations that capture the spirit to tunes that have stood the test of time, this unique collection is well summed up by the words of Australian journalist, Jan Neary :

“The Seedboat is a totally captivating experience of tunes, songs and rememberings crafted together seamlessly by two master musicians.. Maggie and Colum are superb performers individually: together they achieve a sweet harmony that transports you gently and effortlessly to another time and place… The Seedboat is a journey for the soul.”

Find this album in the shop!